International Perceptions of the Paranormal 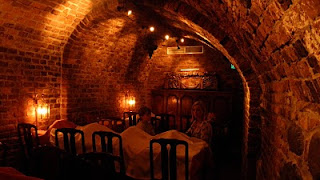 A haunted cellar in a Swedish restaurant

Having just returned from a whirlwind trip of visiting ten countries, I was interested to see how people from many diverse cultures respond to stories of the paranormal.

While on a cruise in the Baltic Sea, I met an Israeli family currently living in Belgium. Of course the conversation over breakfast necessarily turned to what everyone did for a living. I have overcome my reluctance of many years about telling people what I do - fearing that they will either become silent with embarassment of not knowing what to say next or take me less than seriously. So I introduced myself as an attorney-turned-psychic-detective, figuring at worst, my pronouncement could be an interesting icebreaker for the conversation. Indeed it was.

The husband was intrigued - but quickly stated he was a skeptic about all such matters. His wife and even their 14-year-old son also claimed to be skeptics. However, when I told them about meeting their famous fellow-countryman and world-famous psychic spoon-bender Uri Geller in London, their attitude changed. Apparently, the son and several other family members had witnessed one of Uri Geller's famous television shows, broadcast all over the world, in which he asked everyone to put a spoon or something made of metal near the TV set and claimed that he would simultaneously cause spoons all over the world to bend.

In fact, I remember Uri telling me about this program. He also did a program where he claimed to have caused London's giant tower clock Big Ben to stop ticking for a minute or so and then restarted it along with broken watches all over the world. Being a skeptic myself, I did not put much stock in Uri's fantastic-sounding story and I attributed it to a bunch of hype.

It turns out that this family put a spoon on top of their television set and literally watched it bend by itself during Uri's TV show. I asked them over and over again, where the spoon was placed (on top of the TV); whether anyone touched it (no); whether they could actually see it moving (yes); was there a noticable difference in the bend (yes); and so on. I was actually quite shocked to have run into a family that had witnesses this alleged worldwide psychic event. The young boy claimed that it freaked him out so much that he still thinks about it and is still someone frightened by the spookiness of watching a spoon bend by itself. Several cousins and his aunt and uncle also witnessed the spoon bending. Everyone was apparently quite shocked.

It's funny how the world is a small place. Only last month, I attended a party with many Israelis present. When I brought up my "profession," one of them (clearly a no-bullshit type of Israeli businessman)told me he had been in the same army detail with Uri Geller while doing his military duty, and had watched firsthand how Uri had been able to accurately help the soldiers with psychic reconnaissance and locate objects that were hidden.

And here I am. I actually had the opportunity in private to watch Uri bend two different spoons before my very eyes and yet, still, I question the reality of it. I mistrust his magician origins and I mistrust my own eyes. It is so difficult to overcome our mental prejudices which are nothing but a lifetime accumulation of practical personal experiences about how the world does (and therefore "should") operate. While none of us really trusts anecdotal evidence of the paranormal, we should learn to accept multiple similar reports of such activity - since scientific "repetition" in the normal sense of the word is generally not possible.

It is so easy to bump into the paranormal and the psychic all over the world, no matter where you go, or who you talk to. We are all just embarassed to talk about such things.

While dining at one of the best restaurants in Sweden located in the collective basement cellars of five 17th century townhouses near the water, I was told by several waiters and waitresses that the restaurant is haunted by a female ghost who was the proprietor of the establishment in the mid-1600's when it served as a tavern house for local sailors. It is also believed that her lover haunts the cellar with her. In fact, I was told, many of the waitresses and waiters refuse to go certain rooms because they are just too freaked out by the presence of the ghosts!

Clearly, ghosts and psychic attunement are univeral phenomena. So is our shared international fear of them... I did not have to look far to find people with experiences with the paranormal. They are everywhere - in every country in the world regardless of culture or societal mores. It is time we began to engage in an intelligent conversation about these kinds of phenomena without fear of being ridiculed or deemed hare-brained.
Posted by Nancy du Tertre at 6:42 AM No comments: