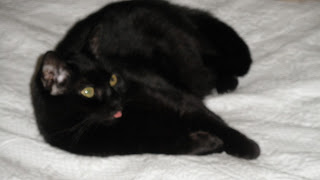 I have two black cats - Salem and Phoebe.  I realize as a psychic medium I qualify, for all intents and purposes as a "witch" under historical definitions.  So, having these two black cats - or "familiars" as the superstitious folks in the Middle Ages referred to them - is sort of appropriate.  Familiars were considered witches' helpers in concocting their magic or reborn witches.   Historically, black cats have been deemed to have special powers, and to be either good luck (in Asia and England) or bad luck (United States and Italy).  However, I have basically inherited them from my kids.

We went to see a lady in the neighboring rural town who had over 100 wild cats living in the stables with her 6 horses.  My kids each picked out one cat.  My daughter picked out Salem, an exceptionally friendly male cat who greeted her in the barn.  Salem snores and is often unaware that his tongue is hanging out of his mouth.  My son picked out a very sweet, delicate and handicapped female cat who had been rescued from the top of an oak tree when she and her litter mates were abandonned by their mother.  Phoebe is the only cat I know who actually talks in a very sweet girl-voice and says with perfect diction "Me-ow!"  Despite her sweetness, she is highly vindictive.  She pees on things to express her displeasure - including on us!  She has one bad eye and one ear that was chopped by a veterinarian for ferile cats to show they were spayed.

After months of trying to coax them out of tool chests, from under the car, from behind the furniture, and even from underneath the indoor foundation of the house, they finally began to acclimate to us and our house.  We decided to keep Salem in my daughter's bedroom and Phoebe in my son's bedroom.  Just so they would have a safe place to go.  That seemed to work out fine, except that it soon became clear the two cats couldn't stand each other.  At first, Phoebe terrorized Salem. She chased him all over the house when Salem was afraid of his own shadow.  But as the months rolled by, the roles reversed.  Salem gained self-confidence.  He began to attack Phoebe until she retreated into the only safe place in the house - a small space behind my son's bed.  Usually at 4:00 AM in the morning, there would be horrific cat wars - hissing, thumping, running, fur flying, hideous meowing and yowling.  They still don't like each other much.  There is now a kind of uneasy truce.  My daughter went off to college and I inherited Salem.  He now sleeps on my bed.  Phoebe sleeps on my son's bed.

One night about two months ago, I was sleeping when I was gently awoken by what I believed was Salem who jumped up on the foot of my bed and walked around my feet.  I could feel the indentation of the small cat feet in the mattress as he carefully avoided my feet.  I moved my legs and  - to my great shock - suddenly bumped into the "real" Salem.  He was sound asleep, curled up in a ball, in the crook of my knees.  When I looked down by my feet, there was no cat!

"Well then," I thought suddenly wide awake, "Who the heck was the cat walking around my feet?"

It was not Phoebe.  She refuses to enter my room because she recognizes it as Salem's territory.  Moreover, there simply wasn't any cat by my feet!   I considered the implausible idea that it might have been the ghost of a cat!  As a psychic medium, I decided early on to law down the law, and I banned all spirits from entering my bedroom.  I don't mind if they go elsewhere.  But it never occurred to me to include the spirits of animals.

I told one friend about this unusual experience, but didn't mention it anyone else.

Three days ago, my son, who is 13 years old, casually mentioned that he has recently had the experience of what he called a "ghost cat" in his bed.  He said that while he was sleeping, he felt the footsteps of a cat walking on his pillow behind his head.  He thought it was Phoebe until he realized she was sleeping near his stomach.  If it had been Salem, Phoebe would have immediately run behind the bed.  But more importantly, there was no cat on my son's pillow.  I had never spoken to him about cat ghosts or the spirits of animals.

Apparently, we have attracted a ghost cat in our house.  It likes walking around while the other cats are curled up and sleeping on the beds.  Maybe this is a cat from the barn who knew our two cats when they lived there, or perhaps it is one of the many cats I have had as pets over the years.  I just don't have enough information.  I would love to hear from anyone else who has experienced an animal spirit.
Posted by Nancy du Tertre at 10:37 AM 9 comments: