The Story of an Alien Linguist 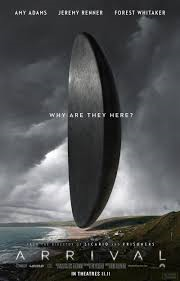 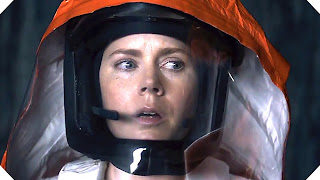 The new movie "Arrival" was released by Paramount Pictures on 11/11 of this year.  I knew about it in advance because several people had recognized that the story was remarkably similar to my own.  Without giving away the story, I can tell you it is about a woman, Dr. Louise Banks (played by actress Amy Adams), a professor of Romance Languages, who is engaged by the military to try and decode the strange communications made by aliens who have suddenly landed in giant egg-shaped spacecraft in twelve locations around planet earth.  She and fellow theoretical physicist, Ian Donnelly (played by actor Jeremy Renner), repeatedly enter the enormous spacecraft with other military officers and come face to face with weird, floating, octopus-like creatures that make odd rumbling noises and squirt circular ink-blot shapes into the atmospheric mist when communicating with the humans.  Ultimately, Dr. Banks is able to decode much of the basic language.  She also begins to understand that part of their "language" includes a psychic way of comprehending the nature of time and that allows her to see forwards and backwards in time.  As the United States and other foreign nations struggle simultaneously to understand the meaning of the aliens' sudden command that they "offer weapon" to the other nations - the world verges on war with the aliens.  The solution exists in the meaning of those two specific words.  "Weapon" turns out to mean the alien language itself and not an armament. I will not give away the ending.  Go see it.  It's a great movie.

For those of you who don't already know, I have written a book entitled "How to Talk to an Alien" (New Page Books, 2015) and have lectured around the country on the topic of alien communication.  I have called this new field within ufology "Exolinguistics" and I have proposed a new method of attempting to crack the code of various alien languages (yes, I have established there are many spoken and written alien languages).  This method involves creating a kind of "Rosetta Stone" comparing 1) actual alien artifacts, 2)recollections of writing/symbols/sounds and 3) channeled, dreamed or automatic writing/speech samples.  This has already yielded interesting results.  I am in the process of setting up a worldwide database of alien speech and written communications.  This has become my passion.  I have been invited as a guest on several radio shows because people immediately recognized the similarities between my work on alien communication and the subject matter of this movie.

The number of similarities between myself and Dr. Banks went beyond the obvious superficial one that we are both linguists attempting to decode alien language.


And then there are some strange inexplicable seemingly paranormal events tied to this movie beyond the merely synchronistic events...

I was invited by Paramount Pictures, the studio that released "Arrival," to come to New York for a pre-screening of the movie several days before its actual release date.  Several days later I spoke with a friend of mine who saw the movie after it was in the movie theatres.  She made an offhand comment, something about wasn't is interesting about the fact that the alien space ships landed in twelve locations and that 144,000 might be saved.  I laughed and agreed with her.  I told her I was surprised she picked that up.  I recalled the very subtle line in the movie delivered by, I thought, Col. Weber, while in the military bunker, about how only 144,000 people would be saved.  I recalled thinking at the time that the Biblical reference to Revelations 6:7 and the 144,000 people that would be "sealed" and "saved" from the 12 Jewish tribes would be too subtle for most movie-goers to digest.

Anyway, I quickly forgot about my friend's intelligent observation.  I saw the movie for a second time the following night in a movie theatre.  The following day, I was folding laundry when it suddenly occurred to me in a terrible flash that the second time I saw the movie there was absolutely no reference to the 144,000 people.  That line was gone.  Missing.  Poof!  That couldn't be correct, I thought.  I had distinctly heard it with my own ears, the line recited in the movie in NYC, the first time I saw the movie.  I immediately called up my friend.

"Remember what you said about the line in the movie about the 144,000 people?" I asked her.

She immediately responded, "Oh, that wasn't in the movie.  I was just making an allusion..."

"Yes it was in the movie!" I insisted, almost shouting.  "It absolutely was in the movie the first time.  I heard it with my own ears.  I know who said it.  I know when it was said.  But it was gone the second time I saw the movie.  That's impossible!"

And so, I am deeply troubled.  I know what I heard.  And I am sure there is a reason why I heard something that apparently does not exist in "reality."  I believe it has something to do with the future of our planet, when aliens will arrive in their craft, and only certain numbers of individuals from the human race - hopefully more than 144,000 - will be "saved" or "transported" to a different planet.  But obviously, for now, I cannot confirm this interpretation.  Like Dr. Louise Banks in the movie, I "hear" things and "dream" things that seem to be jumbled up in the sea of time where it is difficult to judge whether you are moving forwards or backwards in history.

Finally, another strange synchronicity occurred.  I was talking to a contactee who has been writing in some kind of unusual, possibly alien, language for many years.  I had originally been a guest on his radio show and when he had asked me to analyze his alien language while on air, the show was abruptly shut down.  All internet was cut to my home.  We could not re-contact each other.  That was odd to start with.  Since then I have examined his alien language, which resembles ancient Sumerian in some respects, and we have maintained contact.  In our texts, I asked him to try and find meaning in his writings.  He said he was sure the alien language was very condensed and compact in the way it communicated meaning.  Then he gave me a little example that nearly knocked my socks off.


"But strangely enough now that I'm concentrating on it," he said, "an example would be: 'Carry conceal permit' would be translated as 'Permission/weapon'"
He has not seen the movie "Arrival" yet and didn't even know the plot.  His apparently "random" choice to show me an alien language translation of "Permission weapon" blew me away.  It sounds just like the alien command that is at the heart of the alien language issue that nearly ignites world war in the movie: "Offer weapon."
When I told him how many people had spontaneously told me they thought this movie was about me, he laughed and said, "It IS about you!"  Who knows.  Time will tell.