A Healer in Greece 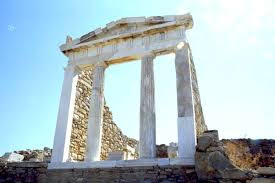 A couple of days ago, I returned from a month-long trip to Europe.  We visited eleven countries - a whirlwind voyage which culminated in a week on the island of Mykonos, Greece.  My husband and I were fortunate enough to stay with a dear friend who owns one of the most spectacular homes on the island overlooking the island of Delos, one of the ancient sacred sites of Greece second only to Delphi.  He took us out, almost every day, in glorious sunshine, vivid blue skys, on the windswept Aegean Sea, in his traditional 35' Greek fishing boat to the island of Delos with his international crew of friends from Germany, Switzerland, Bulgaria, France and Greece.  We didn't go to the tourist spots.  We went only to the most remote beaches and spent the afternoons walking on the strange, rocky, treeless terrain that resembles, in my mind, something closer to Iceland or perhaps the surface of the moon.

I had never been to Greece before.  I had heard about the beautiful islands for years but couldn't begin to tell you where they were geographically located.  I wasn't aware that the islands, at least the Cycladic Islands located south-east of Athens and comprised of 220 islands surrounding the sacred island of Delos, were mostly barren, nothing but dirt and rocks, devoid of vegetation, and, unlike the mainland, very windy.  Delos has been inhabitated by humans at least as far back as the third millenium B.C.!  It means "The Visible" after its name was changed from "Adelos" ("The Invisible") because it was the one place where the Olympian Greek god Zeus' mistress,  Leto, is able to give birth to her twins, Apollo and Artemis, because Zeus' wife, Hera, made sure she was shunned by all other lands.  Since Delos was considered a "floating island" (and therefore not "land"), she was able to deliver her children after Zeus' brother, Poseidon, anchored the island to the bottom of the sea with granite pillars.  The island is today littered, literally, with ancient pillars, pottery fragments, mosaics, stone walls and huts, and ancient temples.  Over the course of its nearly 5,000 year human history, the island became  a major trading hub for Greece, Rome and the Macedonians.  Egyptian Queen Cleopatra was known to have stopped there on her travels.  There are the ruins of healing temples and, on neighboring islands, hospitals and graveyards, since it was forbidden to either give birth or die on Delos - making it impossible to ever be a "citizen" of Delos.

As we wandered on the beaches of Delos and swam naked in its warm, silky waters, I felt I could almost see the trading boats, the pilgrims to the healing temples, and craftsmen and artisans plying their trades.  It was truly a magical place.  And that was before I understood the history of the island.

As an energy healer and medical intuitive, I have many friends and colleagues who are versed in the arts of sacred healing.  My friend Susan, who I have known since we were both eleven years old, is an energy healer in Rhode Island.  We have "joked" for years about our probable past lives together in Greece.  In fact, Susan once went to visit a psychic who told her that she and I had both been oracles in ancient Greece (Delphi?) and that we had both started separate and very different competing schools of healing! (I wish I could have been a fly on the wall for that reading!)

At any rate, to my great surprise, I met another powerful healer named Barbara, a German woman, who lives on the island of Mykonos.  We quickly became friends and I felt as if I had known her all my life.  We shared healing techniques and she told me stories of taking the powerful psychotropic drug ayahuasca as part of the spiritual ritual among shamans along the Amazon River in Peru.  We connected in a way that was, for me, highly unusual.  By the end of my trip, I inadvertantly found that I had done 5 or 6 healings on various people.  One man, suffering from some kind of debilitating dizziness which occurred when moving his head or body in certain ways, told me the evening following my energy work on him, that the dizziness had, for the first time in years, disappeared!  I was, of course, thrilled for him.

Barbara then asked me to come to her home for a meeting with one of her clients.  I had initially thought it was so I could witness her healing techniques, but as it turned out, Barbara wanted me to work on the woman.  I worked on her for roughly an hour and then, suddenly realizing I was supposed to catch an airplane back to the mainland, told her I had to leave and applogized for my quick departure.  She asked if she could pay me for my work, and I said no.  As I ran out the front door, the client handed me a small pouch and asked me to accept it as her gift to me.  Reluctantly, I did, and then jumped in the car.  I didn't have a chance to look at it until I was in Athens.  When I opened the pouch, I was it was an exceptionally beautiful necklace made of several long strands of enormous white, black and irridescent gray pearls - in a style reminescent of a Greek goddess!

I was deeply moved by her gift and couldn't get over the feeling I had, all the way home on the plane, that I had worked as a healer in Greece - today and back then.
Posted by Nancy du Tertre at 7:33 AM No comments: