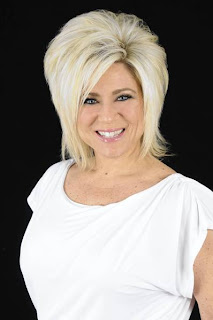 I always liked Theresa Caputo, star of TLC's hit television series "The Long Island Medium" now about to enter its third season.  She was seemingly natural, funny, loud-mouthed, and amazingly talented in her ability to speak to the dead with apparent accuracy.  I especially enjoyed her very typically Italian Long Island obsession with her hair-do - an odd platinum, hair-sprayed helmet hair (rivaled only by Newt Gingrich's wife Callista's undented blonde head piece).  Her obsession made her vulnerable and thus believable.

That is why I was so shocked and then disappointed to see her appear in a Priceline.com commercial which has aired repeated on television since June.  The basic theme of the ad is that Theresa is sitting at a dining room table giving a psychic reading to a young couple who are trying to connect with the spirit of the Priceline Negotiator, an advertising character long played by actor William Shatner, until the character was "killed off" by the advertising agency in a bus accident.  Theresa appears confusingly like herself in her hit reality show where she gives readings to clients seated across from them at a small table.  She appears to be "linking" with the spirit of the deceased person the couple wishes to contact.  Then, while gently waving incense with her shaman's eagle feather, she seems confused.  She tells them she is hearing the spirit say something bizarre and she starts singing the advertising jingle for the Priceline Negotiator.

What!!!  I couldn't believe my ears.  She just sold her soul for cash!!

Her sell-out to the commercial world was stunning for many reasons.  First, and most importantly, Theresa decided to opt for cash over morality.  She clearly didn't care that she was using her status as a well-respected spiritual medium in order to grab some quick and easy cash.  Second, she betrayed those who have believed in her abilities as being "true."  By agreeing to be in a hokey, staged commercial basically mocking spiritual mediums, she betrayed those who trusted her.  Don't forget.  Her clients are people who are sad and grieving for loved ones who have died!  Third, by making fun of the information that comes through from dead spirits to mediums (by suggesting that mediums fake their information for commercial gain), she unfortunately has made all mediums look bad.  If she thought this was "funny" or "cute" - she was terribly wrong.  It wasn't.  It made her look like a total fraud - in real life, in reality television, and in advertising.

According to a Reuter's article quoting the Priceline.com press release, Caputo was quoted as saying, "It was a blast doing this spot. The hardest thing about comedy is delivering those lines with a straight face.  But it is the Negotiator, after all, and his sole concern, wherever he is, is saving people money on their priceline.com hotel rooms."  Really?

Priceline's Chief Marking Officer Brett Keller was clearly pleased by the ad.  He said: "Given the 'status' of the Negotiator, Theresa Caputo was a natural choice to help us continue the narrative of this campaign. It was a pleasure working with Theresa and we hope her fans enjoy seeing this side of her."

No, sorry, I don't think this ad will make Theresa's fans love her.  In fact, this ad has backfired in Theresa's face!  By contrast, it was a brilliant move by Priceline.com. The company stands to gain from all the publicity and controversy from having used Theresa's reputation for its own benefit.

Spiritual mediums, like myself, already walk enough of a tightrope trying to make people understand the reality of the spirit world without having someone like Theresa Caputo muddy up the waters again just to make a quick buck.