Unless you live under a rock, if you have been involved in any discussions of anything remotely paranormal, then you have undoubtedly heard the term "Occam's Razor" often used by skeptics to discredit any paranormal theories.

Back in the 14th century, a fellow named William of Ockham, an English Franciscan friar and logician, developed a principal of logic which has become commonly known as "Occam's Razor."  It was supposed to help with problem-solving.  Basically, it states that if there are competing theories or hypotheses, the one with the fewest assumptions should be selected.  It is meant as a guidepost for investigating a theory, but doesn't suggest that the theory with the fewest assumptions is actually the right answer.  It is a principle of parsimony or economical succinctness.  It is quick and dirty.
Unfortunately, skeptics have twisted the true intent of this logical format and used it to completely annihilate any investigation or scientific exploration of paranormal theories for unexplained phenomena.  Therefore, I have decided to investigate the validity of Occam's Razor and, as you will see, have replaced it with my own principle of logic that I call "Nancy's Blade." 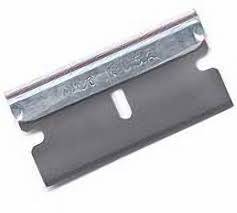 Let's take an example.  I do many paranormal investigations.  Let's take a hypothetical case of an alleged haunting of a private residence. It is a fairly classic case of a haunting.  The residents, a young couple, claim their apartment is haunted by a ghost.  They say the television sometimes switches on by itself; the small table in the hallway shakes and bangs against the wall by itself; the apartment has acquired a strange, unpleasant pervasive odor not related to anything inside or outside; violin music is heard at 3:45 AM underneath the rocking chair in the bedroom; the husband has seen a shadow figure walk through the hallway; the couple hears disembodied footsteps walking around the apartment; and both have begun to experience strange health effects such as headaches, nausea, and tightness in the chest.

So, the question is:  Is their apartment haunted by a ghost?  Applying Occam's Razor, since we are dealing with two competing theories (ghosts exist versus ghosts don't exist), we must select the theory with the fewest number of assumptions.  Most of us would agree that ghostly and paranormal phenomena can sometimes but not always be explained by common experience and laws of physics.  It requires more assumptions about the nature of the universe, spirituality and possible unknown laws of physics, to account for the existence of ghosts.  Therefore, skeptics argue that Occam's Razor requires us to conclude that ghosts do not exist.  End of story.

However, this is where it gets fact-sensitive and much more complicated.  So let's examine some of the number of factual assumptions necessary for both theories - not just the assumptions about the theories!


Television Set Turns on By Itself
Ghosts Don't Exist
TV may have had a surge of electricity which caused it to turn on.

Ghosts Exist
There would have had to have been multiple surges; the TV's are plugged into surge protector outlets; this still happened when the TV's were unplugged; and this doesn't explain why all the other electrical appliances didn't suffer simultaneous electrical surge problems.

Violin Music is Heard Under a Rocking Chair at Night
Ghosts Don't Exist
The violin music is probably music being played by the neighbor who lives below and is likely playing a real violin or a radio late at night.

Ghosts Exist
The neighbor doesn't own a violin and is a quiet college student who says he doesn't play the radio in the middle of the night and doesn't hear the violin music heard by the couple upstairs.  The music is only heard briefly by the couple, only at a specific time at night, and only directly under the rocking chair not elsewhere beneath the floor or in other rooms.


The Small Table in the Hallway Rattles, Shakes and Bangs Against the Wall

Ghosts Don't Exist
There may have been unbalanced items on top of the table that shifted slightly causing the table to tip over; the floor may have vibrated due to an earthquake or trucks on the road; or this is a fantasy of the occupant in a semi-sleep state at night.

Ghosts Exist
There were no items on top of the table when it made the noises, and besides it was actually banging back and forth against the wall; no earthquakes have been reported; the apartment is located in the interior of a large, quiet residential housing complex located a quarter mile away from the road; both occupants were awakened by the noise suggesting it was not the fantasy of one person or the collective hallucination of two people, and the wife actually sees the table moving by itself one night when she gets out of bed.

Alright, I could keep going on and address all of the phenomena, but you get the basic idea.  Skeptics would still argue that Occam's Razor requires us to conclude that there was no ghost or haunting in this apartment.  Why?  Because it would require us to make too many outlandish assumptions about reality and the known laws of physics in order to conclude that these events were caused by a ghost.  Therefore, we must conclude these events were unrelated, fully explainable, and not caused by a ghost!

However, the skeptics are violating the basic rules of logic and twisting them in order to make Occam's Razor seem to work in their favor.

If you study the rules of logic, you will quickly see that this cannot be a case of logical "deduction" - which is A = B, C = B, therefore C = A.  (E.g. "All widows have a dead husband, this woman has a dead husband, therefore she must be a widow").  Nor is this a case of logical "induction" -  which is all A which has been observed is B, therefore all A is probably B.  (E.g. All swans we have observed are white, therefore we logically infer that all swans are probably white.)  Both of these types of logic lead to the conclusion that there is a single right answer (if A, then B).

However, as I have shown above, all of the necessary preconditions or facts necessary to substantiate a "logical" conclusion are missing.  Every single one of the preconditions suggested as reasons for the strange events was rebutted (e.g. the neighbor was playing the piano or radio - she didn't own a piano and wasn't playing the radio!).

This leaves us in the uncomfortable position of not being able to confirm the logical conclusion mandated by Occam's Razor.  What do we do to solve this problem of logic?  I propose we look at another, perhaps less dignified, less well-known type of logic known as "abductive reasoning."  Under this principle, the consequence "B" (the existence of a ghost) can be inferred from the preconditions "A" (strange piano music heard under the bed). Therefore, I have created a new principle to replace Occam's Razor.  I call it "Nancy's Blade."   This principle states that "If there are competing theories or hypotheses, the one which sustains the fewest rebuttals of fact, should be selected."   I have eliminated the language about the fewest number of "assumptions" because that has been terribly misinterpreted as referring to the conclusion (B) and not the facts (A).

My principle also provides for the possibility of multiple "right" answers among multiple competing theories.  Causality is multidimensional, as any student of the paranormal knows.  There can be many "causes" or "explanations" for any event because we are all interconnected and any "cause" or "effect" can be localized or remote.  All causation is relative in the Einstein sense of the word.  The fact that a tree falls over in my backyard could be caused by a failure of its root system, a local storm, shifting trade winds over the continent, or a solar electromagnetic storm over the planet - or all of the above!  All events are interrelated.  Thus, it makes more sense to have a logical principle that allows for multiple explanations for causation.

Posted by Nancy du Tertre at 12:00 PM No comments: