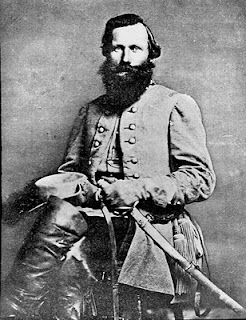 After I wrote the previous blog "Ghost Encounters," a friend of mine emailed me and said, "Wouldn't it have been funny if you connected with the spirit of Jeb Stuart while you were staying in the Jeb Stuart room at that inn?" I thought about that and suddenly realized that I had assumed (for no obvious reason) that the ghostly presence that appeared about 5 feet from my bed had, in fact, been Jeb Stuart. I don't know why. I just felt that way.

So, I decided to research Jeb Stuart. I was vaguely aware that he had been a Confederate officer who stayed at the inn but I had no clue what he looked like. So I looked up his photo on the internet. Sure enough, in all his photos he appears much as I described this male spirit: angular jaw, medium height, stocky, middle-aged, wearing a long coat and boots. Apparently, he had a flamboyant side and enjoyed wearing his military uniform. Furthermore, I learned that he had died of a gunshot wound in battle in Richmond. He was shot in the stomach and died from bleeding intestines. Suddenly, my image of a nurse spirit that I described as part of my experience as a lay in bed imagining that she was tending to a wound in my stomach, made perfect sense. Apparently, I connected with Jeb Stuart's death...

Posted by Nancy du Tertre at 7:44 PM No comments:

I will be leading a paranormal investigation at a reputedly haunted tavern near Gettysburg for the Northeastern Paranormal convention's annual Phenomenology 102 in a couple of months (see www.intuitivision.com for details). I thought I would stop by the inn on my way to Pittsburgh where my daughter had a college interview. I figured I could get a better "sense" of the inn by spending the night there.

Jim the bartender agreed to stay extra late and wait for us to arrive at the inn at 10pm, long after the kitchen and other facilities had closed. We arrived and he showed us our room, the Jeb Stuart room, on the second floor, and showed us how to lock the front door of the inn if we needed to go out. The inn seemed very quiet. As it turned out, there were only two other people spending the night in this 10,000 square foot inn - a young couple who briefly said hello. Jim said they had the room next to ours. He also told us that most cell phones don't seem to work in the inn, so there was a white phone in the salon which we could use if we needed to call out. I asked him if any employees stayed at the inn during the night. He said no, no one. So it was just the four of us in this huge inn. Then he wished us a pleasant stay, and left through the front door.

My daughter and I walked up the stairs our room. My daughter, who is a heavy sleeper, went to sleep almost immediately. I, on the other hand, am a very light sleeper and sleep like an Indian with one ear always alert to the environment. I lay awake in bed listening to all the sounds of the room. I was making a mental catalogue of the noises so that I would be able to recognize any noise that was not "normal." The hot water pipes made a big racket - they sounded like someone playing a comb and that was followed by a series of tapping, thumping, clanking and so on. Then it would stop and there was total silence until the furnace fired up again. There was a lot of traffic, mostly trucks, rumbling through underneath our windows. This created alot of noise and cast many moving shadows against the walls until about 2 or 3 am when it became very, very silent in the room.

Seven times during the course of the evening while I was awake, I heard a bizarre noise come from the area of the side window. It had the loud, unpleasant, squeaky, grating quality of someone rubbing a window pane with Windex. I really didn't know what could cause such a bizarre noise but decided to chalk it up to the possibility that a large tree branch might be scratching the outside of the window. (Of course, when I looked out the window the next morning there was no tree!).

I also heard vague movements coming from the area of the fireplace. They didn't exactly sound like small-footed animals skittering around. They seemed more muffled, larger, and slow- moving. But I decided to attribute these noises to possible wild animals trapped inside the walls or birds living in the chimney.

I finally fell asleep around 3 am, confident that I had heard the full repertoire of possible noises in the room. Suddenly, I was awoken out of my sleep by a very loud noise of a floorboard creaking 5 feet from my bed. My entire body flushed with instant goosebumps and my heart began racing - it was a disgusting feeling. The air had the charged atmosphere I have come to associate with the presence of spirits - it was at once electric yet muggy and thick. I opened my eyes and looked at the space from where the sound had emanated. There was nothing. But I "felt" the presence of a male spirit staring at me. I knew that the sound of the floorboard was not the ordinary settling noises of the foundation of an older home. It was the sound of weight moving on a floorboard. I was completely panicked. I lay awake in my bed and didn't move for a very long time. As I listened intently in the dark, I heard what sounded like more muffled footsteps, but lighter, near the fireplace. They "felt" like a different person from the other noise.

I realized I had no other option than to try and fall back to sleep. And so I did.

A few hours later, I was once again abruptly awoken from my sleep. This time someone was knocking on my door. They knocked gently three times. I was completely petrified. I knew that no one else was in the inn and that no employees had entered the building. I also knew that the couple sleeping next door were sound asleep and had not left their bedroom. I immediately knew that if anyone was knocking on my door - there were unequivocally supernatural. My heart felt like it was beating out of my chest and I prayed that the knocking sounds were only some ambient noise that I had incorporated into my dreams. But the "person" knocked on my door again - three times - and paused, as if waiting for my response. I could hear the floorboards creak in front of my door as if they had shifted their weight. I was terrified now because it was "real" and not my dream. They knocked again, this time a bit louder, as if annoyed. Then waited. Then there were four loud knocks at the door. It was like a real-life horror movie. I prayed to God that they would not come in the room - a silly thought, since the room already seemed to be inhabited! The clock said it was 5:27 am.

Finally, after what seemed like a very long time, I fell back to sleep. In my sleep, I still had awareness of the employees finally entering through the front door downstairs and walking around performing their duties. I heard my neighbor's door open as they walked downstairs for breakfast which was served starting at 8am.

When I woke up at about 9:15 am, I decided to use my K-2 EMF meter to get a baseline reading of my room to see if it registered any high levels of electromagnetic fields which might have accounted for my feelings of paranoia or dread. My meter consistently showed a "normal" reading (a green light registering between 0 to 1.5 millGauss) all around the perimeter of the room including my bed.

Now the strange thing was that when I moved the meter to the door, it suddenly registered a much higher electromagnetic field (a yellow light registering between 2.5 to 10 milliGauss which is considered a mid-level magnetic field). As I walked from the door to the spot about 5 feet from my bed where I had sensed the presence of a spirit, the meter remained on yellow. Then as I walked directly to the fireplace where I had sensed another presence, it still remained on yellow. But the weird thing was that if I raised the meter higher than about 6 feet or lower than about 2 feet, it went back to green. It was as if I was standing in a free-floating "cloud" of an electromagnetic field. It was not being influenced by possible fields emitted from wires or pipes normally found in the walls, floor or ceiling. It was as if I had just created connect-the-dots with the three paranormal experiences I had had during the night. It seemed to confirm, in a very bizarre way, my feelings of the presence of ghosts.

As a medium, I have trained myself to be much less skeptical and much more free-associative. I will give you my completely unverifiable psychic impressions. I felt that the first spirit presence was a man standing near the bed - middle aged, angular jaw, a little stocky, wearing a long overcoat and boots. The presence near the fireplace also seemed to be a male, perhaps slightly younger, wearing a light-colored waistcoat and slimmer. The presence at the door who had knocked seemed to be a woman. It occured to me later that perhaps if this was a residual haunt (where the ghost only engages in repetitive behavior and does not intelligently interact), then perhaps it was this woman's job to wake up the man in this room at 5:30 am so he could go to work. I also felt that someone or something might have been touching my feet (although I dismissed this on the assumption that perhaps my daughter was slightly moving her feet under the sheets). I also "felt" pressure on my abdomen and "imagined" that a female spirit of a nurse was tending to my "wounds" as I lay imobilized on a stretcher. Not a far stretch of the imagination since the inn had served as a battlefield hospital during the Civil War...

At any rate, the housekeeper confirmed the next morning that she and various guests had experienced several ghostly encounters at the inn - although no one had ever reported anything unusual in the Jeb Stuart room.
Posted by Nancy du Tertre at 4:33 PM No comments: