Why Repair What You Can Throw Away? 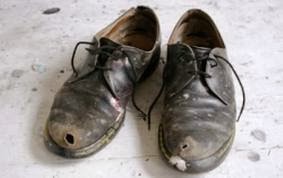 I recently took my 14-year-old son, William, to buy new clothing.  He has suddenly shot up like a bean pole, as so many teenagers do, and none of the clothes I bought him only a few months ago still fit.  He has a school band concert coming up and the required attire for boys is black dress pants, a white long-sleeved shirt, black socks, black dress shoes and a tie in a color of his choice.  Naturally, no one notified me of this important dress code until only a couple of days before the concert.

William and I made a mad dash to the mall.  I had forgotten that it was the weekend between Black Friday and Cyber Monday - let's just call it Hellish Shopper Weekend.  I figured Macy's Department Store was a good starting place.  The problem was that William was suddenly betwixt and between Boy's and Men's Departments.  He was too tall and had suddenly outgrown the familiar Boy's Department.  I was completely unfamiliar with the Men's Department.  We wandered aimlessly in the Men's Department for a while.  We picked up folded shirt packages with strange inscriptions inside like neck measurements and trousers with alien waist and inseam measurements.  Nothing was simple any more.  Gone were the days of Small, Medium and Large. Worse still, in the lingering days of our lengthy economic recession, department stores are now like large empty wastelands of clothing.  Sales attendants no longer stand around eagerly waiting to assist.  You are lucky if you manage to see a live human being managing a cash register.  Quite literally, you are on your own.

I began to snap under the pressure.  I told William that it was his responsibility to locate his proper clothing.  He gave me blank, but irritated, stares in response.  Clearly, he was more clueless than I was.  We wandered aimlessly for a long time.  Occasionally flipping over shirts or pants, failing to understand their import, and putting them back on the shelves.

I looked helplessly at the cashier who was busy with a long line of Christmas holiday customers.  Clearly, she couldn't give me the least bit of advice.  I then saw a young man walk down an aisle wearing an official-looking badge. I stopped him and asked if he could help us.  He must have taken pity on me, since I looked hot, flustered and annoyed with everything.

His badge said his name was Jordan.  Jordan chit-chatted with William for a while about high school band concerts.  Then, after a an extended period of time rummaging through all the different sizes of shirts and pants, we managed to find a white shirt with a neck size about a half an inch too large and their smallest pair of pants in terms of waist size.  It wasn't perfect but then nothing was going to be perfect.  William then selected several purple and fuchsia colored neckties, a pair of classic pink suspenders, and black cotton socks.  All that remained were black dress shoes.

"I thought we weren't going to buy any shoes, Mom," said William.  "You said we could repair the old ones."

"True," I admitted, "but you could use another pair."

"That you could repair shoes," he said with amazement.

I must have looked at him like he was an alien. Are you kidding me?  (I didn't say that).  "Of course you can repair shoes!" I replied.  "You didn't know that?"

"No, I never heard of that before," said Jordan.  "I always just buy a new pair."

"You can repair the sole, the heels, get them polished, and they look like new," I said in shock that the words were coming out of my own mouth.  I felt like someone from a different century.  And then I couldn't resist adding, "You know, that's what's wrong with your generation.  You don't understand the concept of repair."

And the more I thought about it, the more I began to think Jordan's ignorance about shoe repair is symptomatic of a much larger problem on our planet.  For the last century, we have made an art out of manufacturing items - anything from nylon stockings to washing machines to cars - with planned obsolescence which forces the consumer to go back and buy new products after a short period of time.

When nylon stockings were first invented in 1939, DuPont made the terrible mistake (in retrospect) of making such strong nylon material that their stockings never got runs or snags.  The company soon discovered this meant consumers didn't need to buy a lot of stockings.  So they began manufacturing purposely defective nylon stockings.  So, as every woman knows,  it is not unusual to only be able to wear a pair of stockings once before you have to throw them away because they are ruined by tiny snags in the nylon.  As humans, operating on the principal of maximum profit, we have taught each other to discard, throw away, abandon perfectly good objects simply because we did not know how to repair them.  The old "Home Economics" high school class, which taught skills like sewing and cooking, was mocked by my generation and replaced with much loftier sounding classes like "Website Design" or "The History of Fashion."

At the risk of sounding like an old fart, I believe that with natural resources in a state of depletion and our planet choking in its own pollution, we need to learn the lost art of repair.  Children of the earth - I urge you to learn the simple tasks of repairing and mending, instead of tossing things in a garbage heap.
Posted by Nancy du Tertre at 4:27 PM No comments: