I met Arnold Franco on board the Jeanne D'Arc, a French military ship, during a cocktail reception while docked in the New York City harbor.  A graduate of Queen College, where 60 percent of the class of 1943 were enlisted or called to military duty, Franco, now age 83, served with an elite group of code breakers - or crypanalysts -with the 3rd Radio Mobile Squadron.  In 2005, Franco was awarded the prestigious French Legion d'Honneur for his outstanding work during the war.

As we stood on the metal deck of the ship, sipping our cocktails and looking at the Manhattan skyline, I decided to tell Franco about my chosen profession and my book on psychic intuition.  He seemed fully accepting and told me an incredible story about how he once used intuition in his military decoding activities and, as a result, was able to warn the Allies about Hitler's plans to invade southern France and saved countless numbers of human lives.

A coded German message came into his hands one day.  It was suspected to be an order to begin preparations for an atack somewhere in Europe around the Mediterranean Sea.  The message was heavily coded and, probably because it was top secret, did not contain the ordinary codes used by lower level orders from the German command.  The only letter the Allies were able to decipher was the letter "J" which appear once as the second letter of a scrambled word.

Franco described the moment of his insight when he suddenly and instantaneously realized that the letter "J" was the second letter in the city on the small French island of Corsica, known as "Ajaccio."  He told me that his intuitive guess of "Ajaccio" was not a logical guess. He somehow suspected or intuitited that the coded word would be the name of a place and this place was the location of Hitler's attack.  He had no reason to logically suspect either one.  His knowledge of geography from his school days was pretty good so his brain was able to pull up the city of "Ajaccio" as having the letter "J" in the second letter spot.  He was also aware of another fact - not immediately relevent or obvious at the time - that Hitler was a student of Napoleon's military strategies, in particular, Napoleon's disasterous attempt to invade Russia.  Thus, in Franco's mind, he made the strange intuitive leap and correlation that this message might be related to Napoleon!  Therefore, since the city of Ajaccio was Napoleon's birthplace, the connection suddenly jumped out and made total sense.

Psychic intuition is intimately linked with those other things we know and accept such as educated guesses, subliminal information, gut feelings and past knowledge.  The brain operates on multiple simultaneous levels and is capable of achieving extraordinary feats.  It is time that conventional military, legal, and corporate officials recognize its value.  Arnold Franco's intuitive leap is an excellent example.
Posted by Nancy du Tertre at 9:55 AM 3 comments: 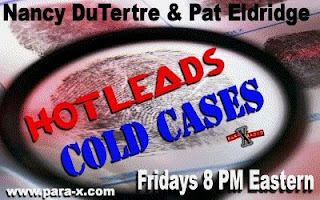 My good friendnd co-host Pat Eldridge and I are launching our brand new radio show this coming Friday, December 10, 2010, called "Hot Leads Cold Cases" on Para-x Radio (http://www.para-x.com/) at 8pm EST.  The show is intended to spotlight ways in which psychic detectives, police, detectives, and law enforcement can interact effectively to help solve crimes and cases.

We will also be devoting a portion of the show to working on real investigations.  Anyone desiring this kind of help should email me at ndt@theskepticalpsychic.com in advance of the show with an outline of the issues involved and the kind of help needed.  As usual, there are no guarantees - but my personal experience has led me to believe that very often psychic guidance can provide clues, tips or possible unforeseen pathways for investigators to pursue through traditional methods.
Posted by Nancy du Tertre at 6:17 AM No comments: