How To Talk to an Alien 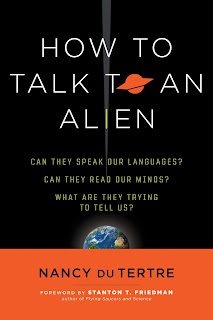 I have just written a new book called "How to Talk to an Alien" which is set to be released in three weeks (available on Amazon and Barnes & Noble).  I am very excited about it.  When I first got in touch with my publisher at the beginning of this year, I asked if they might be able - by some miracle - to release the book in time for my presentation at the annual MUFON Symposium 2015 in Irvine, CA on September 25, 2015 (http://www.mufonsymposium.com/).  To my shock and amazement, he said yes!  The only catch was that I had to agree to write the entire book in two months.

"Sure," I told him, "No problem!  I can write the book in two months and have it ready for you."

I am not quite sure why I told him this.  I had previously published four books and they had each taken me between 5 to 10 years to write.

And so I wrote this book in two months.  That was also a miracle!

It is a book about a new field I call "Exolinguistics."  This means "exo" or "outside of" or, in this case, it refers to "off planet Earth" and "linguistics" meaning "language."  I am fluent in French and speak some German and Thai, so I have some basic familiarity with various human languages.  The book is about alien languages.  I examine them from the point of view of Comparative Linguistics - which is not an easy feat since part of the problem is finding matches for the various languages reported and channeled by alien or off-world experiencers.  We must learn how to communicate with various alien races for a number of important reasons including that there are numerous documented cases showing aliens can shut down our nuclear missile systems, power plants, violate our commercial and military airspace, abduct ordinary citizens, and conduct bizarre medical experiments on humans!

I had already delivered a presentation at the "Experiencers Speak 2014" Conference in Maine last September on the same topic.  It was the first time I had seriously ventured into the world of ufology.

Frankly, my entire journey into the world of Weird Stuff has been an intentionally very slow voyage.  I started with the psychology of intuition, which morphed into the psychic world due to the lack of conventional scientific data on intuition.  I learned I had some psychic and mediumship ability.  As I explored these new talents through training and apprenticeship, I bumped into the Paranormal World.  This world was very different from the Psychic World.  The Psychic World is filled with love, peace, woo-woo, healing, non-analytic thinking, and crystals.  The Psychic World is mostly populated by women.  The Paranormal World is filled with ghost hunters, horror movie fans, Hells Angels wannabees, electronic equipment, and has a predominantly male constituency.  The Psychic and Paranormal worlds overlap - obviously - but they feel very different.

It took me years before I slowly ventured into the Paranormal World.  I was already aware, from my psychic work, that negative energies, spirit attachments, and demonic attacks are very real things and not meant to be played with.  Too many testosterone-filled braggadocio types go swaggering into haunted locations trying to rile up the ghosts while oblivious to their own peril.  My point here is that my journey into these various spirit worlds has been intentionally slow and careful.  I know what lurks.

I never thought in a million years there might be a connection between psychic and paranormal, and then, later, with ufology.  Boy, was I wrong!  The Ufology World has overlaps with the Psychic and Paranormal worlds but "feels" very different.  Like the Paranormal World, it is primarily masculine-dominated.  However, the type of men involved are different.  The ufology men are mostly men of science - engineers, aerospace experts, computer specialists, astrophysicists and so on.  They value objective evidence and the scientific method.  Interestingly, both fields are filled with men who work professionally in law enforcement.  This makes for good field investigations and uncontaminated crime scenes.  However, generally speaking, the paranormal men pay lip service to the so-called scientific method of investigation of spirits.  Ultimately, they are too excitable and think "scientific" means using equipment instead of human beings.  Most fail to establish experimental safeguards or think about their methodologies.  They are mostly cowboys looking for a thrill - and manage to capture some interesting audio and video data along the way.  On the other hand, the typical ufology man tends to be blind and ignorant to the very important and very real spiritual aspects of ufology.

According to Jan Harzan, the executive director of MUFON, I will be the first professional "psychic" to speak at the annual MUFON convention.  I find this to be odd.  As I have discovered, alien contact and communication is often interactive on the psychic level.  Telepathy is the most frequently reported type of communication between aliens and humans.  Other types of psychic features, like teleportation, dematerialization, out-of-body experience, mind control and manipulation, hypnotic suggestion, and shape-shifting, are also commonly reported in ufology.  Case studies also frequently show paranormal activity increases among abductees and contactees after there has been interaction with a UFO or alien species.  So why aren't psychics and parapsychologists more involved in this field?  Why is it dominated by scientists?  Can't we all figure out a  way to work together toward a common cause?

Just hoping to change the world...