My Mentor Ingo Swann In Memorium 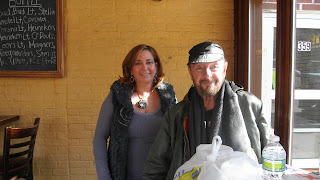 On February 1, 2013, I learned that my friend and mentor Ingo Swann passed away.  Even though he was 80 years old and in terrible health, I somehow did not imagine that he would actually pass away.  Ingo was one of the most famous psychics in the world and co-created the CIA's psychic spy program, better known as remote viewing.

The last time I saw him was a year ago in November, 2011.  Strangely, I did not post the above photo of us on my website, out of respect for his privacy, until last month.  No particular logic.  Just felt right.  A year ago, I met him at his apartment on the Lower East Side of Manhattan and we sat, as we usually did, on two small, filfthy square mats on the cement steps of the stoop of his building while he smoked endless cheap cigars.  Ingo spent hours out there during good weather, watching the traffic, looking at the auras of the passerbys, saying hello to the local residents, artists, postmen, restauranteurs...  I had wanted to talk to him about UFOs.  We did, and, as if on cue, the postman walked upt to us and delivered a package addressed to Ingo from his colleague and famous ufologist Jacques Vallee.  He confided in me that a movie was about to be made about his life.

Whenever we ate out, Ingo never finished his meal.  He didn't have much of an appetite - which he attributed to his digestive issues and old age.  But he would always carefully take everything home in a doggy bag.

I hadn't seen or talked to him for many months, and so he told me that getting old was a "bitch" and that no one should underestimate how awful it was.  His problems with his hip had deteriorated over the years I knew him.  He was having more and more problems getting around with a kind of labored shuffle.  And yet, despite living mostly in the basement of his building in his studio which was one flight down of very deep stairs, he didn't complain.  When I used to call him on exceptionally hot summer days when the temperatures hit higher than 103 degrees in New York City, and offered to take him to an air conditioned location, he always refused.  He said he was just fine in his stuffy, airless apartment without air conditioning.

Ingo understood the meaning of living lightly upon this earth.  We would walk around together in his neighborhood.  Occasionally, he would stop to examine piles of garbage put out on the curb and, in true New Yorker style, would select usable items.  One day I carried a bunch of old dishes for him which he took back to his apartment.  Nothing went to waste.  He had no use for what others might see as trendy, new, valuable, glitzy.  He lived lightly and took up very little material space.  He didn't see what others saw.  When we would walk down the street together, he would make comments about the ghosts who passed us on the sidewalk.  The first time I saw his apartment I was amazed (and yet not surprised) to see a stuffed and mounted front half of the body of a giant cat above his tiny kitchen table.

"Yes," he said almost suspiciously.  "How did you know it was a snow leopard?"  (Apparently no one else had ever accurately guessed the species of cat).

His living and dining quarters were not a place of living, the way we normally think of living in an apartment.  Everything was covered with volumes of books.  It was almost too much to take in at once.  The walls were covered from top to bottom with ecclectic bits of art.  It was visually overwhelming.

Ingo told me that in fact he had been deathly ill for the last few months with some respiratory illness.  He had called upon a psychic medical intuitive friend of his in the midwest who, over the phone, had correctly diagnosed the problem (Ingo had been shoveling dog shit out of his building's outdoor basement entrance left by careless dog owners and apparently had acquired some nasty airborne fungus or bacteria) and also correctly told Ingo how to cure the problem using a homeopathic remedy.  Ingo had followed the psychic's advice and was amazed that the entire respiratory issue disappeared within two days when none of the traditional medicines had worked.

Ingo looked at me and said, "You know, I was really very, very sick.  I was on a respirator and I didn't think I was going to make it."

He looked at me funny and said, "What do you mean you knew?"

"I saw you on a respirator with my third eye," I said, tapping the spot between my eyebrows.  I don't know how I knew this, but I did.  I had visualized him in his studio apartment, lying in bed, with a respirator.

He seemed surprised.  A funny response from a man so accepting and understanding of psychic powers.

I am really at a loss of words to explain how much Ingo meant to me.  He was so incredibly aggravating and combative, as well as condescending when he wanted to be, and yet he had one of the kindest hearts and gentlest voices of anyone I ever met.  He told me when I first met him, in no uncertain terms (after I complimented him for saying something nice) that he was definitely not a "nice" person.  And he wasn't "nice" - in any traditional sense of the word.  He didn't want to be my mentor.  He kept refusing to cooperate.  And yet, he kept giving me advice, he sent me important articles, gave me tips about how to investigate the paranormal, and gave me books from his personal library.  He argued with everything I ever said, and yet gave me - to my great shock - a wonderful (and very rare) endorsement for my book "Psychic Intuition: Everything You Ever Wanted to Ask But Were Afraid to Know."

Ingo was highly secretive.  He thrived on his secrets.  He kept his psychic abilities secret.  He refused to tell me how many porno books he had authored in his pre-psychic past.  He told me he knew he had been previously reincarnated as someone incredibly important in history but refused to tell me who.  I wondered if he thought he had been Jesus Christ.  Or maybe Hitler.  At a speaking engagement in recent years, in his opening remarks, he announced that, contrary to the opinion of many people, he was not in fact dead!  He giggled (he was often amused by himself) that he had come back as a reincarnation of himself!

And I believe if anyone could actually accomplish this, I am sure Ingo could.  I miss him.  Alot.