Out of Body Conversations 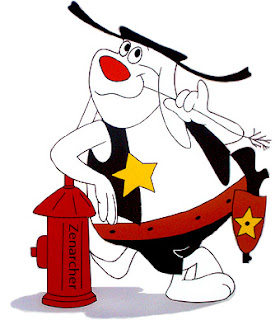 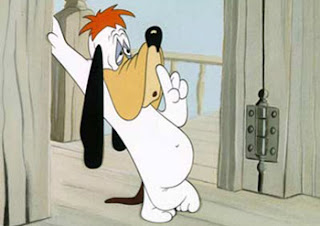 Last week, I found myself in a quiet moment thinking about Deputy Dog and his sidekick Droopy (see above).  Strange - very strange - I thought to myself, because I have not thought about either of them - not once - for about 40 years.  As a kid, before the days of the Cartoon Network or Cable TV, I grew up on Saturday morning cartoons.  One of the coolest things my dad ever did was to come down and sit with me and my brother on the sofa starting at 6AM all the way until nearly noon every Saturday morning and watch the cartoon lineup.  Our favorites were Rocky and Bullwinkle.  Dudley Do-right was okay.  I was never that crazy about Yogi Bear and his sidekick Boo Boo.  These were all part of the same cartoon series that were obviously created by the same studio - Terrytoons.  My father only really enjoyed Rocky and Bullwinkle because of the overlay of adult humor and references to the Cold War and the American relationship with the shady and evil Boris Badenov (get it? Bad Enough?) and his wife Natasha Fatale.  Further, as we grew up, my parents decided to refer to my brother and I as the Hanna-Barbera private detective cartoon characters, Snoop and Blab (I was dubbed "Snoop" because I had to know everything and my brother Peter was "Blab" because he couldn't stop talking).

At any rate, let's be really clear.  I haven't thought about any of these cartoon characters, and especially not the lesser ones like Deputy Dog and Droopy, for over 40 years.  So it was extremely odd when I found myself in a kind of thinking daydream about them last week.

I happened to get on the phone with a dear friend of mine last night.  She has told me that in the past I have actually visited her, in spirit, in her home.  The first time occurred when we hardly knew each other's names and had only been introduced once.  I apparently visited her home while under anesthesia during surgery.  I had not told her about the surgery or anything else current about my life.  She called me as soon as I walked in the door from surgery and asked if I was okay.  She told me later that I had appeared and told her about certain frustrations I was having with something to do with publishing.  She did not know that I had been forced to sign my publishing contract, with a deadline, the day before I went into surgery.

Since that time, I have apparently floated across the country to her home in Utah on several occasions.  I do not remember any of them.  Each time, she has called me and confirmed accurate information which she says I told her during my Out-of-Body visit.

When we spoke last night she mentioned Deputy Dog.

I said, "Wow.  What a coincidence!  I was literally thinking about Deputy Dog last week for absolutely no reason at all."

She said, "That's because you came to visit me again and I was the one who brought it up!  I was talking about Deputy Dog and his sidekick who used to fly up in the air and then you chimed in and described the way he would float down in the air after he had eaten a tasty bone!"

She added: "Don't you remember?"

Frankly, no I don't.  Despite my excellent ability for dream and trance recall, I have zero recollection of ever leaving my body. The fact that she was the one who raised the issue of Deputy Dog would certainly explain why that thought entered my conscious awareness even though I hadn't thought of the cartoon for so many years.

As far as I am consciously aware, I have never had an Out-of-Body experience in my life.  It is certainly very peculiar to be told that I am busy floating around the United States at night and having verifiable conversations with my friend who lives clear across the country!  I was perfectly willing to accept that I wasn't really traveling in spirit at all, and that it was simply my friend's extraordinary ability to tune into aspects of ESP and telepathy.  Prior to this, I was sure it had nothing to do with me.  But this last conversation was so bizarrely accurate it has left me truly wondering if indeed I am flying around at night and simply don't remember!
Posted by Nancy du Tertre at 3:08 AM No comments: