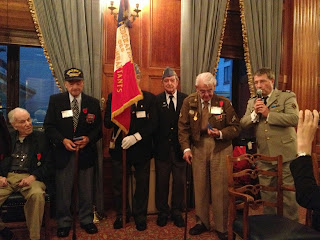 Last June, I had the pleasure and the honor of meeting well-decorated World War II veteran Jess E. Weiss.  He was the keynote speaker at an event given by ACREFEU an organization of French reserve officers in New York City.  Although he was frail, required a walker and a hearing aid, at the age of 97 years old, Jess was amazingly able to deliver a riveting, coherent 45 minute speech at the podium.  He was truly remarkable.

Jess was a combat veteran who fought in many of the most active and terrifying war arenas during World War II in Normandy, France, Belgium, North Africa, Sicily and Germany.  On D-Day, June 6, 1944, Jess was corporal squad leader with the Second Battalion, Sixteenth Infantry, First Division - better known as "The Big Red One" - this was one of the very first army infantries to launch the devastating and bloody assault on Omaha Beach in Normandy, France.  Many of you might actually recognize Jess.  He was invited by NBC-TV to return to Omaha Beach in 1994, on the fiftieth anniversary of D-Day, and interviewed by Tom Brokaw, author of "The Greatest Generation," as the oldest survivor of this event.

Prior to his presentation, my husband played some scenes from Spielberg's 1998 movie "Saving Private Ryan" as the young American soldiers landed in the water off the coast of Normandy and were immediately killed like sitting ducks by Germany strongholds above the beach.  I was given the honor of sitting next to Jess at the dinner table.  I could barely watch the movie because the scenes of blood, gore and terror were all too real.  I turned several times to look at Jess to see how he was reacting to this fictionalized version of what had happened to him in real life.  He seemed to be slowly shutting down.  His feeble body crumpled a bit and he closed his eyes.  As the movie got louder and more frightening, I jumped out of my seat and begged my husband to stop the movie.  I was afraid it was going to kill my frail neighbor at the dinner table.

My husband obligingly stopped the movie.  Jess opened his eyes and returned to the room.  I asked him if he was okay, and he smiled and said he would be fine.  He and I spoke for a while about death and dying, and his lifelong battle with post traumatic stress disorder (PTSD) which was not a diagnosed condition in his soldier days.  In fact, absent a physical injury, he and other young soldiers who survived D-Day were quickly sent back into battle.  He had spent a lifetime trying to deal with sudden panic attacks (even the sound of raindrops made him hide under tables) and wondering why he had survived when none of his buddies had lived.  What I hadn't expected was that our conversation would take a turn into the spiritual realm, and we talked about near death experiences, out of bodies experiences, and clairvoyance.  He and I immediately, and strangely, felt like two peas in a pod.

What I did not know at the time was that he was the author of several books.  He had written two in particular, "Warrior to Spiritual Warrior" and "The Vestibule," that I found particularly fascinating.  It turned out that he had written about near death experiences before Dr. Raymond Moody coined the term and became famous as the pioneer in the field.  In fact, Jess had compiled first hand accounts of several people who had died briefly and returned to tell a tale of continuing as a spirit in a spirit world beyond death.  Jess worked extensively with Dr. Elizabeth Kubler Ross, a pioneer in the field of exploring death.  Jess did not fear death.  He seemed to welcome it on some level because he understood the spiritual continuation.

When I read certain passages in his book, I could not imagine what he had endured in real life and then for decades thereafter in his mind.

"But many on our LCT were new recruits who had not yet experienced combat.  I knew this because of the way they talked, how they carried their gear, and by the fact that they did not have the Big Red One shoulder-patch insignia.  To these recruits, the shelling [as they neared Omaha Beach] sounded like the Fourth of July.  Several of them even stood up to get a better view of what was happening.  Without a thought, I screamed to them "Hit the deck!"  But it was too late.  German artillery decapitated two of them and several others were severely wounded.  A buddy named Braddock and I gave the wounded what first aid we could.

The amphibious tanks were designed to splash into the water and chug ashore.  But under  the intense fire, many LTC's dropped their ramps hundreds of yards from the shore, and their tanks sank like lead caskets, their crews drowning before they could swim free.  When our ramp came down, we were aground on a sandbar a few hundred yards from shore.  A hail of bullets hit the surf right in front of the lowered ramp.  There already were hundreds of GIs struggling to keep from drowning in the rough waters, and some were attempting to dive underwater to escape the deadly machine-gun fire.  Weighted down with full field gear, we were temporary floating targets."  ("The Vestibule," p. xxvii)

This is a man who knew a thing or two about the horror of death.

Jess and I exchanged several emails after that evening.  I asked him if he would be interested in being a guest on my CBS radio show "Hot Leads Cold Cases." (I had already interviewed Dr. Raymond Moody and many near-death experiencers).  He agreed to do the interview and wrote:

Dear Nancy:
I know last evening was an honorable occasion reminding us of the greatest
war in history, WW II's Normandy's Omaha Beach, and know it was an honor and
a pleasure to be a part of it.
It was not a subject I wish too or preferred to talk about, but your husband
Patrick's realization of what Omaha Beach meant to France and the USA
touched my dutiful sense of justice.
Sitting next to you was a sense of togetherness that transcended the subject
of finite life was truly comforting, uplifting and a sense of Oneness.
God bless you and your delightful family,
Sincerely,
Jess

He stopped responding to emails shortly thereafter.  I learned that on October 27, 2013, Jess had passed away.  I kicked myself for not acting faster to set up my interview and failing to recognize that at age 97 every day counts.  This gentle man, with a profound knowledge of life and death, has joined the spirit world and knows the answers to his questions.

Postscript:  The day I wrote this blog, I learned a new friend of mine (who I met the exact same month I met Jess Weiss), a  U.S. Air Force Reserves Master Sgt., Morris County Republican Committee member and former Parsippany Town Councilman, died that same morning of a sudden heart attack.  I had just seen and spoken with him one week earlier.  I sensed something was "off" but didn't know what at the time.  In retrospect, I recognize it was because he had a gray aura.  Jim Vigilante was a tall, good-looking guy apparently in the prime of his life and good health - he was only 49 years old.

So, the lesson is that every day counts ... no matter whether you are 97 or 49 years old.  Life is short.  There, but for the grace of God, go all of us....  Tell the people you love, that you love them because today could be the last opportunity.