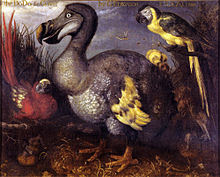 The extinct Dodo Bird
Many people are genuinely frightened by, yet neurotically focused on, the prospect of imminent natural disasters - things completely out of our human control.  The end of the Long Count Mayan Calendar on December 21, 2012 seems to have become the lightening rod for our disaster-consciousness.  People fret endlessly over various scary prospects like crashing into Planet X, extreme solar flares, meteor hits, magnetic pole shifts, supernova explosions, volcanic eruptions and so on.

I have two things to say about this.  First, our human obsession with the "End of Times" is really nothing more than a human psychological projection of our fear of our own personal mortality.  We fear our own death.  We know it's coming.  So we legitimize our fear by making it bigger, grander and worldwide - encompassing all of humanity.  We blame it on global catastrophes and out-of-control events.  Yes, sadly, the truth is that you and I will eventually die.

Second,  even though death is inevitable, we humans conveniently ignore the greater and inevitable catastrophes we face here on planet earth.  Global warming is no longer the subject for armchair debate.  About two years ago, I went to Princeton University to listen a lecture given by Ralph Cicerone, President of the National Academy of Sciences, about global warming.  The lecture hall was packed.  Using statistics, charts and graphs, he clearly demonstrated that while the earth is indeed in one of its normal, anticipated, natural cycles of global warming, there is an undeniable correlation between the increase in our use of fossil fuels (gas and oil) and a freakish, sharp, totally unnatural increase in global warming.  It began in the 1970's and is increasing at an alarming rate.  No doubt about it - humans are the cause of this unprecedented rise in global warming!  We are leading ourselves to the brink of natural catastrophe.  Why do we bury our heads in the sand and refuse to confront our own behaviors?  Why are we becoming a self-fulfulling Doomsday prediction!

Here is a sobering thought: Ninety-nine percent of all species who ever lived on this planet are now extinct.  Human activity has dramatically increased the extinction rates for the first time in 65 million years.  Is the human race next on that list?  History says yes.  But probably not before we cause the extinction of almost every other species on earth.  Do we really believe scientists will come up with an 11th-hour solution?  Politicians and leaders are nowhere to be found. Americans - who will fight to the death for their Constitutionally-guaranteed "individual liberties" - don't seem to get it.  We are living in different times. Democracy as we know it is at risk of becoming as extinct as the Dodo Bird.  We are entering a New World where, since we cannot seem to voluntarily control our own greed and consumption, the terms will be dictated to us collectively - otherwise we all perish!

Despite my pessimistic tone, I say all of this with cautious hope and optimism.  Recently, a few countries (unfortunately not my beloved United States) have come up with some radical solutions.  Equador, followed by Bolivia, have passed national legislation creating Constitutional rights for Nature.  Sound a bit bizarre?  Maybe to the human who views the planet as his own personal candy store.  The Equadorian Constitution restricts human activities that will lead to "the extinction of species, the destruction of the ecosystems or the permanent alteration of the natural cycles."  Plants, insects and non-human animals now have legitimate "individual" rights!  If that seems unfair to you, all you have to do is consider the alternative.

I was delighted to see on a recent trip through the various balkanized nations of the former Yugoslavia, that the governments have actually erected bridges across the highways - not for humans, but for animals.  Superficially, this seems like a terrible extravagance since it has no obvious human benefit.  Why waste taxpayer dollars on animals?  Because it is a solution to animal extinction and human territorial expansion. 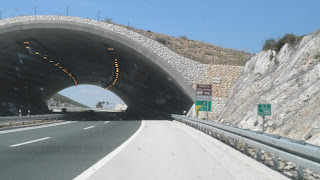 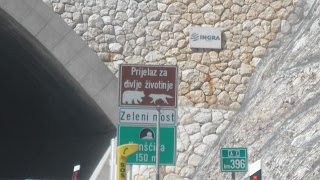 In the former Yugoslavia, the government builds bridges so wildlife can cross the highways!  Bridges built for animals, not humans!  What a concept!  Photos by Nancy du Tertre.
I believe there are three basic ways for you to prevent Doomsday and save the human race from going the way of the Dodo bird: 1) Repair instead of replace, 2) Share your "property" with wildlife and plants even when it "costs" you, and 3) Accept less even when "more" is available.  If you simply live your life by these three principles, you may save the human race from extinction and become a living prophesy of hope, not doom.

Posted by Nancy du Tertre at 11:50 AM No comments: